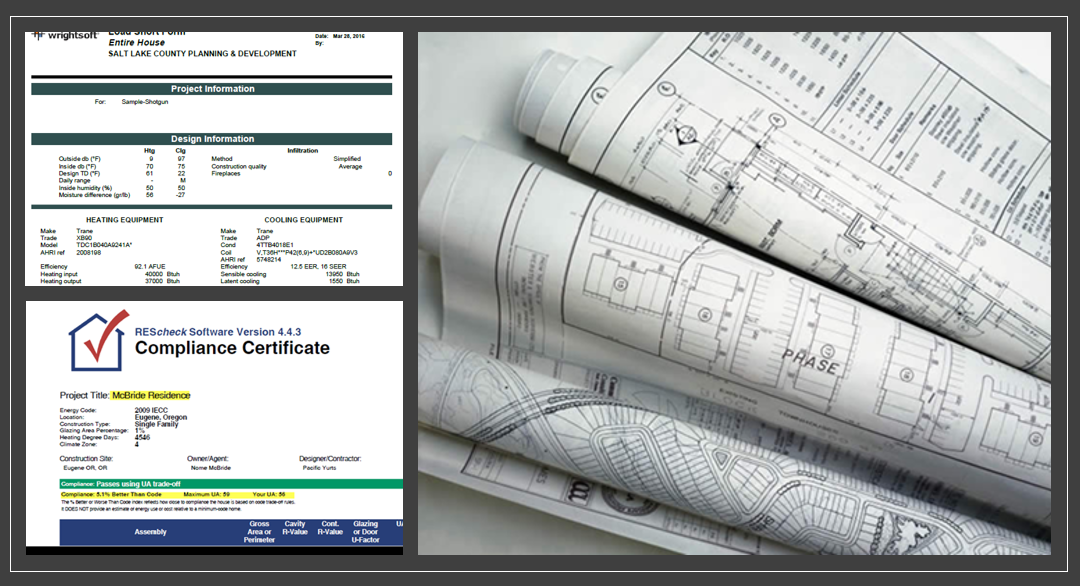 This discussion is the third in a series on the code requirements for the designing residential HVAC system in accordance with ACCA Manuals J, D, and S.  The focus here is on the critical importance to accurately list and use correct R-values, U-factors, and Solar Heat Gain Coefficients (SHGCs) on the plans, Manual J load calculation, and energy code compliance documents such as REScheck.  Too often submitted documents list different factors on each document. Which is correct? How will the home be built? These thermal factors, along with the difference in temperature between inside and outside the building, are used to calculate the heat loss and gain through the building envelope. Use the wrong numbers and the calculation is faulty.

U-factor: (Thermal Transmittance) The rate of heat loss is indicated in terms of the U-factor of construction assembly. U-factors are typically used to represent the thermal performance of windows, skylights, and doors; however, also used to calculate the heat flow through wall, roof, and floor construction assemblies. The lower the U-factor, the greater the assembly’s resistance to heat flow and the better its insulating properties.  The U-factor is the reciprocal of the R-value, the R-value the reciprocal of the U-factor.

SHGC: (Solar Heat Gain Coefficient) The fraction of incident solar radiation admitted through a window, both directly transmitted and absorbed and subsequently released inward. SHGC is expressed as a number between 0 and 1. The lower a window’s solar heat gain coefficient, the less solar heat it transmits. A window with a SHGC of 0.30 will allow 30% of the solar radiation (heat in the sun’s rays) in through the window, reflecting 70% of the heat in the sun’s rays back outside.  A low SHGC reduces summer heat gain through east and west windows. This will be discussed in future issues.

The reciprocal relationship between R-values and U-factors is expressed in a couple of simple equations:

It is important to understand U-factors are for an entire assembly, such as all the components of the window.  The U-factor label on the window represents an area weighted average of the U-factors of both the frame, spacers, seals, and glass.  As vinyl is a better insulator (lower U-factor) than aluminum, vinyl windows will have a lower assembly U-factor than aluminum windows with similar glass. Wood, fiberglass and other composites will also perform better than metals. New manufactured windows will include a NFRC Label which includes the assembly U-factor and SHGC. 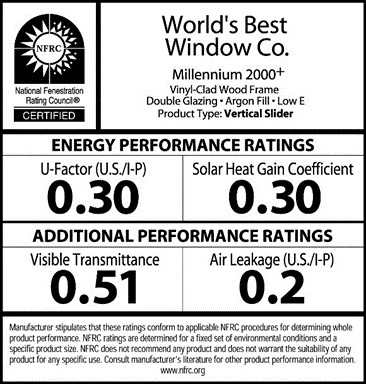 Of course, we use R-values to describe the performance of insulation and other construction materials. Considering R-19 fiberglass batts in 2X6 wall cavities; we do not calculate the U-factor for the wall by simply using the equation above. The R-value in the cavity is R-19; however, the R-value of the wood studs and plates is approximately R-1 per inch, or R-6 for all the wall area that is wood framing. An area weighted average calculation performed, for a wall with studs on 16” centers, results in a R-14.7 for the wall assembly.  The U-factor for this wall will be 1 ÷ 14.7 = 0.068.  The Construction Instruction group has a free app with a useful R-value calculator on it. You can plug in framing centers, 2X4, 2X6, continuous insulation, and cavity insulation. Really cool app.  Here is a screen shot:

Architects, builders, HVAC contractors, insulation contractor, window suppliers, plans examiners, building inspectors and homeowners must understand inconsistencies in the R-values, U-factors, and SHGCs on construction documents will result in improper HVAC system design. I often review plans with R-values different than the R-values listed on the load calculation and the energy code compliance certificates such as REScheck.  Likewise, the U-factors listed on the REScheck may be different than the plans, and in many cases, much lower (better) than achievable with current window technology. Builders are upset when I reject the plans and require corrections, while I am simply attempting to ensure the HVAC system is designed and operates correctly, the home is comfortable, and energy efficient.  A load calculation based on inaccurate R-values, U-factors and SHGCs will not accurately represent the actual building heat loss and heat gain.

In a following discussion, we will detail calculations used to determine the actual conduction heat loss and heat gain for a structure.  Your questions and comments on this subject and others are welcome.